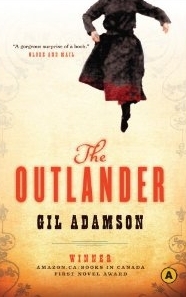 The Outlander by Gil Adamson

It feels like it took me forever to read this book, and honestly it kind of did. Not quite as long it as the start/end dates indicate since I set it aside for the two weeks when I watched the Olympics in the morning instead of reading, but still.

The setting: 1903, in western Canada. Mary Boulton aka “the Widow” is 19 years old. She had a baby, which died, and then she killed her husband (not a spoiler). She fled, pursued by her husband’s twin brothers, who are giant redheads. You might think the giant redhead thing will have some significance later on, but no.

Mary can’t read, although she seems to have had a relatively privileged upbringing (i.e. one where she would have been taught to read). You might think the fact she can’t read and uses an elaborate system of symbols to hide the fact would play a significant role in the story, but no, not really.

Her backstory is that she lived with her widowed father who basically ignored her after her mother died because he was wrapped up in his grief, and her grandmother, who was more the cold-prickly than warm-fuzzy kind. They had servants, and when Mary got married at 18, she had no practical skills. Oh, except she can sew. I admit I’m baffled at what she was doing for her first 18 years (didn’t she go to school? why did no one figure out she couldn’t read? the grandmother seemed like the kind who’d expect a girl to write thank you notes and that kind of thing, so you’d think she’d have clued in even if father was oblivious. if marriage was her grandmother’s goal for her, why wasn’t she taught how to cook and stuff? so many questions).

Anyway, first she’s taken in by an elderly woman but spends her time plotting her escape. When the giant redheads catch up with her, she flees, stealing a horse and some other items. She ends up in the mountains, loses the horse and is near death because she has no survival skills (see above) when she is found by “the Ridgerunner,” a 30-something loner/outlaw/hermit-type who does have survival skills. They hook up but then he freaks out because people, man, they’re the worst! (even when they’re 19yo girls you’re hooking up with) and takes off, leaving her alone in the wilderness once again. She stumbles around some more (still needs to work on those skills). Eventually she’s found by another man—who happens to have the horse she stole and then lost—who takes her to safety.

She ends up in the town of Frank. (And here I have an “ohhh” moment. Now I know what’s going to happen.) She lives with the Reverend Bonnycastle aka Bonny, as his housekeeper, basically. Because she has so many skills in that department. He has this whole lengthy backstory, but like many other threads, this leads nowhere in particular.

The story makes it seem like she’s the only woman in the town, which is… weird. I know Frank was a mining town, so it’s logical for men to outnumber women, but no other women seems hyperbolic. Or Hollywood movie-ish. Take your pick. 😉

She begins vomiting. You know what that means!

One of the cover blurbs called this a “page turner!” I found it to be the opposite. As I crawled through the text, I tried to pinpoint what was missing. It wasn’t the writing. It wasn’t the plot. Finally, I realized what it was. There’s not enough thinking. Mary’s like a non-human animal. Her needs/wants are water, food, shelter, sleep, sex. She doesn’t know how to do anything (except sew, which is just sort of put out there, not really developed as a characteristic) and she doesn’t have any interests beyond taking care of basic physical desires. Ok, eventually she wants the Ridgerunner (in particular). I guess that was just too little, too late for me.

I had sympathy for Mary and her predicaments, but I also found her really boring. It felt like she was not very smart, which is an odd choice for a protagonist. I mean, I get wanting to eschew the “protagonist is the best at everything” trope, but… reading about her reminded me of having a conversation with someone who just isn’t very bright. I wished her well, but if I had to spend much more time with her I’d have stabbed myself in the eye.